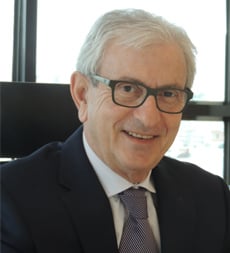 Mr. Theodore Veniamis was born in Vrontados Chios in 1950. He graduated from the University of Athens (School of Business and Economics) obtaining the extended title/specialization in Economics and Law.

Since 1977, he is the founding director of Golden Union Shipping Co. S.A., a dry cargo Ship Management - Operating company of which he is the President/CEO. Golden Union currently operates 38 dry bulk carriers of about 5.0 million TDW and with another 8 vessels on order. He is the head of Golden Union Group, which in addition is actively involved in a growing number of shipping and non-shipping related activities.

Since 2009, Mr. Veniamis is the President of the Union of the Greek Shipowners and an elected member of the Board of Directors and the Executive Committee since 1987.


επιστροφή στη σελίδα ομιλητών
SPONSORS
UNDER THE AUSPICES OF